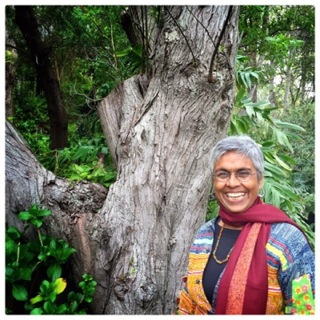 For much of 2015, Fellow Nirmala Nair worked in Bhutan as a consultant for the United Nations Development Program’s (UNDP’s) National Adaptation Program of Action II (NAPA II), a project carried out by the National Environment Commission (NEC) of Bhutan. The project is being implemented by the Tarayana Foundation NGO, which focuses on offering water harvesting solutions in rural areas. 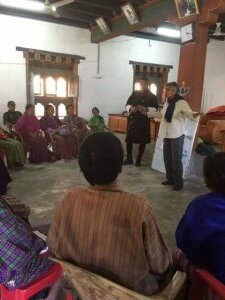 The most exciting part of Nirmala’s work has been in the field, in direct contact with local farmers and community members. She says women are very active and outspoken, often holding positions of power in the villages. Elders are very much active in community meetings, sharing the changes they have seen in the decades of their lives.

While Bhutan has been at the forefront constitutionally in preserving the forests, there have been some conflicting agricultural practices that have contributed to the current challenges in rural areas at the nexus of soil, water, land, farming and climate resiliency. The steep terrain, inclined to severe erosion during the heavy monsoons, is not, for example, suitable for monoculture.

Nirmala’s approach in this project has been to experiment in creating pockets of micro-climate where there is acute water shortage during the long, dry winter months. While not seeking any scientific validation for the approach, she has been following her gut-sense and her own experience as an organic gardener driven by a shared dream, a vision, an inner knowing that land responds to a different ‘calling.’

Most of the first half of the year she spent in connecting with the land and the people; witnessing the changing landscape, connecting with the energies of the land, listening to the stories of the people. Out of this emerged a design, a bundle of solutions and a strategic plan of implementation. Identifying the springs and water-ways that used to inhabit the land was the first step. The eager participation of the elders was crucial in this exercise. It was also an important lesson both for the local young people as well as the program officers to learn how many streams, springs and water-ways have actually disappeared in the process of so-called development, including road construction that often thwarted waterways, while severely destabilizing the slopes.

While almost all of the small farmers are involved in chemical-free farming, Nirmala is introducing them to some newer ideas of building soil and creating mulch corridors. In 2016-2017 she will be deepening these trainings, implementing solutions as well as preparing a training manual.

At the international level, as Bhutan prepares for Paris UNFCCC conference, Nirmala wrote an article for the country’s national daily newspapter: “Will Paris Wake up to Common Sense.” The article is an attempt to shed some light on the fact that large scale funded climate projects have not really yielded much. There is a real urgency to divert some of these funds to smaller, low tech, green tech solutions that take local knowledge, traditions and cultures into consideration.