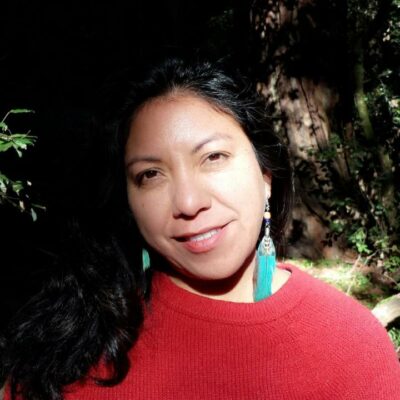 Evelyn Arce Erickson, is of Colombian Indigenous Muisca descent and is the Founder of a new business called Coastal Escape HMB (coastalescapehmb.com). She works with high tech companies like Facebook, Ford and Ancestry in designing team activities for their annual off-site strategic meetings at her beach home. She is one of the Founding members and Chair of the board for a new not for profit organization called Coastside Friendship Organic Gardens (c-Fog.org) whose mission is to create sustainable gardening practices and give access of organic foods for all along the California coast. She joined the HalfMoon Bay Parks and Recreation Commission in 2018 and is currently taking a program to become a Master Gardener. She is also an advisor to a new NGO called Earth Codes Observatory https://www.earthcodesobservatory.org/team

Previously she ran an international NGO for 15 years called International Funders for Indigenous Peoples (IFIP) Under Evelyn’s leadership, (IFIP) became a self- standing not for profit organization while she lived in the Akwesasne Mohawk Territory, New York.  Evelyn built Indigenous Philanthropy to a respected and credible field in the world of Philanthropy. Her work with IFIP created a network of funders, NGO’s and Indigenous Peoples and was instrumental in leveraging hundreds of millions to the most marginalized communities of the world. Evelyn brought Indigenous leaders and youth from over 40 countries to over 15 IFIP conferences, organized donor site visits to over a dozen Indigenous communities, organized dozens of regional meetings nationally and globally and brought alliances of donors together to create the first ever Indigenous- led` funds. Evelyn has spoken about the importance of funding Indigenous communities at over a dozen conferences including United Nations Permanent Forum, SOCAP, Bioneers, Worldwide Initiatives for Grantmakers Support, Council on Foundations, Environmental Grantmakers Association, EDGE Funders Alliance, IUCN, Opportunity Collaboration and others globally and nationally. She also helped to develop and fundraise for several critical publications including “Funding Indigenous Peoples: Strategies for Support” which was published in collaboration with the Foundation Center and GrantCraft. Evelyn has been a nominator for the Goldman Environmental Prize for the last 10 years and she remains an active nominator.  She served as one of the judges for the World Bank’s “Indigenous Adaptation to Climate Change Fund”, a 2 million dollar fund that chose 20 of the best Indigenous global projects.

Evelyn graduated from Cornell University with a Master’s in Teaching, Agriculture and Adult Education and worked for seven years as a high-school teacher to youth in transition from incarceration.  Evelyn has been a board member for Cultural Survival since 2013 and serves as the Chair for the Development committee, and is also on both the Nomination and Executive committee. Cultural Survival, is one of the oldest not for profit organizations in the US that advocates for Indigenous Peoples.

She lives in Half Moon Bay, CA with her husband, two teenage children and rat terrier. She is very active in her community and is involved with many groups including Community Emergency Response Team, Abundant Grace, Immigration Action Network, AAUW, Tutoring kids and more. She enjoys hiking, painting and permaculture gardening

Selected Publications
Evelyn published A Grantmakers Guide and An Indigenous Peoples Resource Guide with colleagues at IFIP in 2011.